You are here: Home / Wines and Spirits / The Six Noble Wines Uncorked 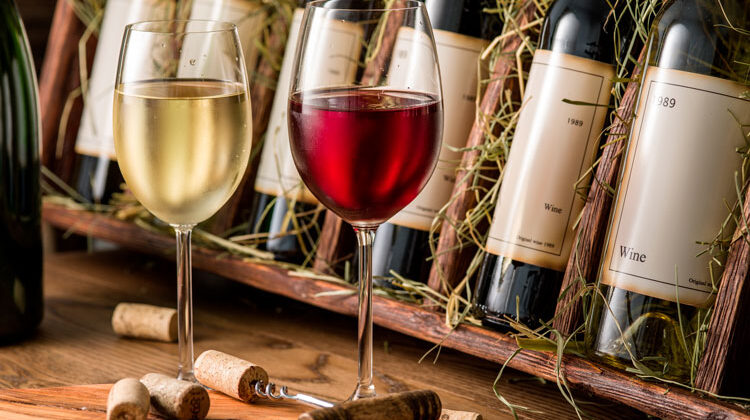 Contrary to how it sounds, the denomination of a noble wine has nothing to do with nobility or price. Today this term is used to describe internationally known and grown grapes that are planted almost all over the world.

For an introduction, we would focus on the classic definition of noble wines, including three red and three white varieties, covering the whole spectrum from light and fresh to full-bodied and bold. It must be noted that sometimes, the classification of noble wines is expanded to seven or even eighteen, offering an even larger choice of aromas and tastes but still revolving around the same six classic varieties.

The list of most well-known red varietals includes Pinot Noir, Merlot, and Cabernet Sauvignon but sometimes is added with Syrah. The order these grapes are mentioned correlates with their intensity with Pinot Noir having the lightest taste and color, followed by more intense Merlot and full-bodied and tannic Cabernet Sauvignon.

Pinot Noir is known for its fruity taste without a hint of roughness. Due to low tannins and light body, it is a great choice for those who drink whites but would like to give reds a try. Drinks easy and would please almost everyone.

Merlot is another easy to drink red with acidity, richness, and tannin being on the average level. Although undeservingly neglected due to the huge popularity of more intense varietals, Merlot can also be a great introduction to red wines with an all-balanced structure, fruity tones, and a mild taste.

Cabernet Sauvignon is an unquestionable leader in popularity among red wines which naturally makes it most expensive. It has an astringent, bold, and firm taste due to high tannin, tasting black currant, plum, and blackberry with black pepper tones. During the years of aging tannins gradually fade, and the wine becomes more sweet and soft. In addition to its other merits, Cabernet Sauvignon has the highest number of antioxidants among other varieties.

Not included in classic half a dozen noble grapes but nevertheless worth mentioning,  Syrah (or Shiraz) is the wine for those who want to get most of everything, wine included. The darkest color, full body, intense blackcurrant, and pepper tones make it a powerful wine on the top of the spectrum. Yet with medium acidity and tannins, Syrah is well balanced and smooth. Often blended to add more mid-palate depth.

Among those, Riesling is the only noble grape of non-French heritage, originating from Germany. Being the lightest in the list, Riesling has high acidity, similar to that of lemonade. It radiates orchard fragrances of lemon and apricots, combined with mineral, earth, and even petroleum tones due to the so-called TDN natural compound. It is a very light and refreshing wine, much loved by wine collectors worldwide.

Sauvignon Blanc is most often made completely dry standing separate from other white wines due to its herbaceous tones. It can display different flavors depending on the terroir, including lime, green apples, and even melon. Still, most of the Sauvignon Blanc grapes taste predominantly grassy and earthy.

Chardonnay is one of the most popular varietal, used to produce the best white wines including Chablis and white Burgundy. Chardonnay wines can be light with lemon notes when young or full-bodied with tropical fruit-driven taste with age. When unoaked, it is crisp and zesty while oaked Chardonnay is vanilla, creamy, and buttery.

The above list is non-exclusive and, sometimes, is expanded to 18 internationally known grapes. At the same time, mentioned six varieties (or seven, including Syrah) are those which were traditionally defined as noble wines and which present a great framework to experience the broadest spectrum of wine tastes and tones.

All of these wines will taste differently, depending on the part of the world where they were grown, as well as on the terroir, age, oaking, and other factors. With all that being said, exploring only six noble wines can be a life-long experience.